Silicon Carbide (SiC) was accidentally discovered in 1891 by an American, named E.G. Acheson, while attempting to create artificial diamond. Unlike many alchemists before him, his efforts were not entirely without success. During his experiments he create dark, irregularly shaped crystals whose hardness was second only to that of diamond and boron carbide. At that time it was already predicted that this material would be very useful in the future. However, nobody could have imagined just how widely used it would be.

ESD-SIC manufactures silicon carbide (SiC) from the raw materials sand and petroleum coke. Sand and coke are mixed in the correct proportions to create a reactive material. From this mix, a material pile, i.e. a furnace, is built. In the center of this furnace is a core of graphite, which serves as an electric conductor.

The graphite core is connected to a transformer and electric voltage is connected. Due to the electric resistance, the core of the furnace reaches a temperature of about 2500°C. At this temperature, the sand and coke decompose, and crystalline SiC is formed. This intense heating of the furnace requires large amounts of electricity, the process is therefore very energy-intensive.
The furnace is covered with a plastic film to capture the gases that are formed during the production process. Gases go to the desulphurization plant and them to the our own power plant to generate up to 20% of the energy used in the furnaces.

ESD-SIC is by far world market leader regarding the environmental friendly and energy efficient way of producing silicon carbide (SiC). We are allowed to produce a maximum of 65,000 tons of high-grade SiC per year. We produce various levels of quality in accordance with the strictest environmental requirements. Not only do we produce various high-grade qualities, we also produce various grain fractions. Our SiC is sold worldwide and used in a wide range of sustainable products and semi-finished products. 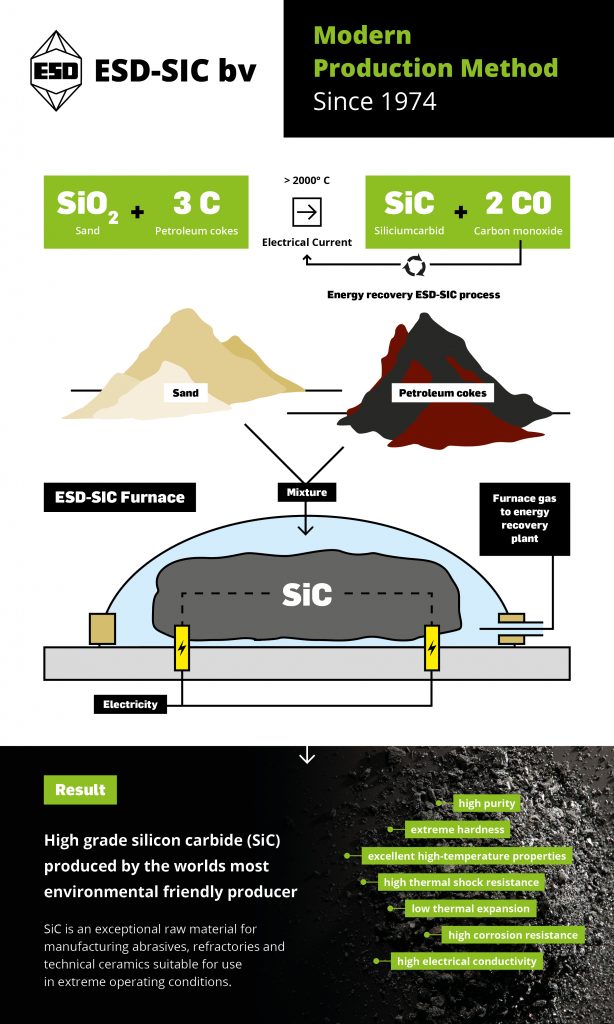